Showing posts from July, 2011
Show all

9 Secrets to Creating The Garden of Your Dreams Secret #4: Create a Garden That Makes You Happy 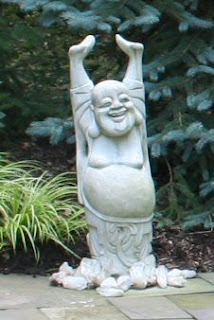 Tour your garden just the way it is now. If you had never seen your garden before, what would you think? Do you like it? Not like it? If not, take the time to figure out why. Sometimes it’s as simple as the fact that you don’t like some of the plants, ornaments, or structures that are there. Perhaps they were put in by a former homeowner whose vision of the garden was very different from your own. If you’ve lived in the same place for a long time, it may be that the way your 60-year old self calls out to use the garden is very different from what you wanted when you were 30. No one has to live with a garden that doesn’t feel right. My garden is not likely to ever appear in a magazine, even though as a scout for a national publisher, I’ve had the chance to study hundreds of fabulous gardens and have interviewed scores of landscape designers. Why? Because I live in the middle of a woodland forest, which means that the garden’s primary summer color is green. It’s very soothing and t
Keep reading
More posts